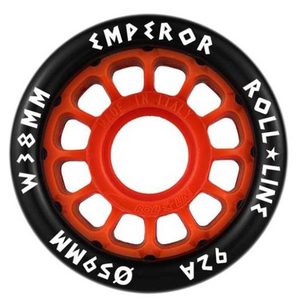 ROLL LINE transformed all the great characteristics of their Gladiator Wheel to a compact and agile 59mm wheel. With the Emperor wheel ROLL LINE completed their Derby Line Up.

Original Description from ROLL LINE:
We launched the new Emperor wheels and those who had the chance to try them had a blast! Be ready to step up your game, folks!

They have a 38 mm width but totally without grooves. The completely smooth surface offers instantly an extraordinary grip. The Emperor are immediately ready for your game, no need of warm up!

But it’s not just this: The external lip, made of our special elastic compound, help the players to get the maximum of push when skating. Some mm of the entire width have been placed on the internal part of the hub: this is a new feature by ROLL LINE. This particularity helps to reduce some mm of the entire track-width of the skate, even by keeping a 38 mm wheel!

So people will at the same time: Having a 38 mm wheel with no grooves that offer an outstanding grip.A narrower track-width that will increase the maneuverability when turning and jamming!
Also the hub have a no-visible secret (which by the way also the “medium” wheels have) The particular shape and composition of the hub allow to have a mechanical-chemical joint with the external compound and offer, in the central part of the wheel, a slightly harder hardness that helps contemporarily to keep a good rolling speed and a blocking action.